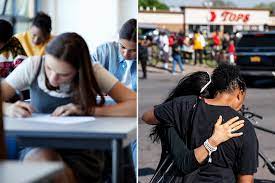 On May 24, NYSED announced that the U.S History Regents scheduled for June 1, were canceled.

The Regents were canceled shortly after the Buffalo shooting and the Uvalde school shooting. A question appeared on the test that creators of the test felt could be upsetting for some.  According to a letter issued by The State Education Department explained, “…our experts determined that there is content on the new Regents Examination in United States History and Government (Framework) that has the potential to compound student trauma caused by the recent violence in Buffalo.”

The letter continued, “Due to the technical requirements associated with administering a new assessment, the regulatory change that the Board of Regents will consider will include exemptions for students planning to take this exam in June 2022, August 2022, and January 2023.”

Students were excited when they found the rumors to be true. Junior Avery Merrihew reacted to the news about the Regents being canceled. Avery said, “There is still a final but it’s better to have just final than Regents. It is a weird situation.”

On the topic of the final for the class, Quinn stated, “History teachers are giving us teacher-made finals in the class. I am quite happy about it.”

Students will have to take final exams in place. Best of luck to all those taking exams this June!